He is counted among one of India’s greatest men of letters and in moulding public opinion. 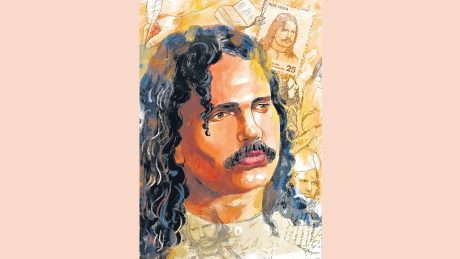 He is known as the father of Hindi literature and theatre. (Illustration by: Mohit Suneja)

Born in Banaras on September 9, 1850 to poet Gopal Chandra, Harishchandra missed the presence of his parents, both of whom passed away when he was at a rather young age.

EARLY YEARS
With the passage of time, Harishchandra, who wrote under the pen name Rasa, strove through his creative output to lend voice to the pain faced by the common man, the poor and those who were subjected to exploitation, the challenges faced by the middle class and a longing to see the country achieve progress.

Even at a young age, Harishchandra seemed to possess a maturity far beyond his age. This was clear from Acharya Ramchandra Shukla’s description of how Bharatendu, at the tender age of 15, visited the Jagannath temple in Puri, Orissa (present Odisha) in 1865 along with his family. Moved by the Bengal Renaissance, he felt a strong urge to add the elements of social, historical and Puranic plays as well as novels into Hindi. Those early influences found their way into his Hindi translation of the Bengali play Vidyasundar, in 1968.

Harishchandra’s work aimed at developing Hindi literature was a lifelong labour of love. It was a recognition of his yeoman’s service as a writer, patron and moderniser of Hindi literature that the title of Bharatendu was conferred on him during a public meeting of scholars held in Kashi in 1880, in recognition of his services as a writer, patron and moderniser, In the words of renowned critic Dr. Ram Vilas Sharma, it was under Bharatendu’s leadership that a “great literary awakening was ushered in as the “second storey” of the edifice of renascent Hindi,” the first having been the first war of independence in 1857.

MULTIFACETED PIONEER
Harishchandra made major contributions not just in prose, drama and poetry but also in journalism. In 1868, when he edited the Hindi poetry-centric newspaper Kavi Vachan Sudha, it was a milestone in the evolution of Hindi literature and journalism. In keeping with the growing sense of national pride and assertiveness, he issued a clarion call to people to use only Swadeshi or indigenously-made goods. He also demanded the replace of Urdu by Hindu in courts and a ban on cow slaughter. In the words of Dr. Sharma, “The publication of Kavi Vachan Sudha by Bharatendu Harishchandra marked the onset of a new era.

Kavi Vachan Sudha promoted not only literature but also news, articles on travel, science and knowledge, religion, politics and social issues. The monthly magazine was gradually transformed into a fortnightly and then into a weekly.

After bringing out Kavi Vachan Sudha for seven years, Harishchandra handed over its responsibility to a friend, Chintamani Dhadphale, and on October 15, 1873, he began publishing the Harishchandra Patrika and Bal Bodhini in Varanasi. When he passed away on January 6, 1885, he had in a short lifespan of 35 years, amassed a body of work in Hindi that was far-reaching in its impact.