How photography and cameras have evolved through the years

Here is a close look into the journey of cameras and development of photography through centuries. 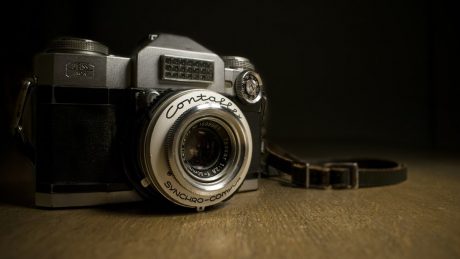 The basic concept of photography has existed since the 5th century B.C.E.

The DSLR or mobile phone cameras that we use today took centuries to evolve into what they are today. The basic concept of photography has existed since the 5th century B.C.E. However, the art of photography wasn’t born until an Iraqi scientist named Alhazen developed a device called the camera obscura in the 11th century.

1100 AD: Camera Obscura
As already mentioned, camera obscura was invented by Alhazen, also known as Ibn al-Haytham . It was a box-shaped device or a room that used to let the light in through a small opening on one side and project it on another surface. However, the images created were upside down. Camera obscura is a Latin word meaning darkened room. Apart from Alhazen, another Chinese scientist named Shen Kuo experimented with camera obscura at about the same time. According to English philosopher, this device was used in the 13th century for safe observation of sun eclipse. According to some studies, artists started using camera obscura in the 15th century.

1400 -1700: Early Optics
Near the start of the 16th Century, Leonardo da Vinci sketched out diagrams and wrote instructions about the camera obscura. In these papers, he included not just pinholes but also simple glass lenses. This is the time that witnessed the advent of magic lanterns They allow people to project images painted on glass slides onto large surfaces.

1827: The First Photograph
The very first photograph came into being when Joseph Nicephore Niepce, a French inventor, experimented with a pewter plate coated with bitumen and exposed light on it through a camera obscura. After being exposed for many hours to the light, the bitumen hardened in the exposed areas whereas the unexposed areas could be removed with a solvent.

1830: Daguerreotype
Frenchman Louis Daguerre began to try exposing images onto metal plates in the 1830s. The result was the creation of a process called Daguerreotype. It used to involve a copper plate coated in silver which had to be exposed in iodine vapour coating and then brought out to  light. Through this process, a lasting image could be created which would not change if exposed to light.

1851: Wet Plate Emulsion
Frederick Scott Archer and Gustave Le Gray almost simultaneously invented the collodian wet plate process. The resultant negatives were required to be coated, sensitised and developed all within the span of 15 minutes, which made the use of a portable dark room necessary.

1871: Dry Plates
Richard Maddox, an English physician, discovered a new process he called dry plate. Unlike the wet-plate process, dry plates, which used dried gelatin emulsion, could be stored for a period of time before development. Following this, rapid improvements were made decreasing exposure times so that cameras could be handheld.

1880s-1920s: Flexible Film Rolls
George Eastman, in 1988, invented film with a flexible base which made it unbreakable and roll able. With these, box cameras that could be mass produced became a reality. The 35 mm film was invented by Kodak in 1913. In the mid-1920s, the German camera maker Leica used this technology to create the first still camera that used the 35 mm format.

1948: Instant Film
Edwin H. Land and his company, Polaroid, introduced the first commercial instant photo camera, the Land Camera 95. This camera used a secret chemical process to develop the film inside the camera in less than a minute. The company refined this technology over the next few decades and their black and white instant cameras became widely popular.

1950s: SLR Cameras
Two Japanese companies Asahi and Nikon introduced the single reflex lens (SLR) which remains the most widely used system in photography to this day. They used a movable mirror behind the lens which reflected the image into the tiny hole called the viewfinder. The photographer could see the end result here before hitting capture. Nikon then introduced interchangeable lenses which offered more variety and capturing power.

1970s-1980s: Compact Cameras
Compact cameras, introduced in the late 1970s and early 1980s, made the process of photography so simple that their commercial use became easy enough for children. Also called ‘point and shoot’ cameras, they were small, lightweight and had auto focus systems. The first of these was released by Konica in 1977. These cameras became popular for casual use while professionals still preferred SLR cameras.

Present Day: Smartphone Cameras
Most mobile devices now, especially smartphones, have a built-in camera. The first one was introduced by Samsung in 2000, the SCH-V200. Then in 2007, Apple introduced its first smartphone camera with iPhone. Other companies, like Google, with its Google Pixel camera-capable smartphone, followed suit. Now, smartphone devices are outselling digital cameras.