Newton’s year in quarantine: That's when he changed the world

During the Great Plague of London, Isaac Newton made remarkable discoveries in calculus, motion, optics and gravitation. 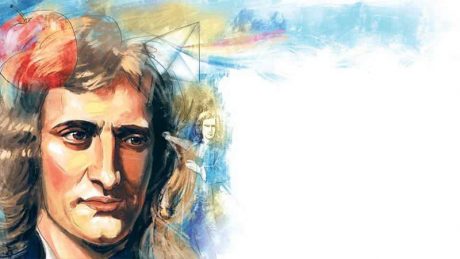 The year 1966 is known as ‘Newton’s Annus Mirabilis’, or the 'Year of Wonders'. Illustration: Mohit Suneja

A major outbreak, be it a pandemic or an epidemic, changes the world in more ways than one. The Great Plague of London, an epidemic that originated in 1665, also transformed the world in an unprecedented way, thanks to a 20 something young man who decided to devote the whole year in exploring different concepts of physics and mathematics. Similar to the COVID-19 lockdown that kept us confined to our home, the outbreak of plague in England had the whole nation resort to their version of social distancing to avoid the spread of this deadly disease. Back then, Isaac Newton was  a student of Trinity College, Cambridge. The epidemic sent him back home to his family farm of Woolsthorpe Manor, where the budding scientist stayed in quarantine for a whole year.

Apart from shielding him against a disease that wreaked havoc on thousands of lives, the serene environment of Woolsthrope allowed him to delve deep into the untrodden realms of science. During this phase, Newton made remarkable discoveries in various fields including calculus, motion, optics and gravitation. Later, this unbelievably productive year, 1966, came to be known as the ‘Year of Wonders’ or ‘Newton’s Annus Mirabilis’. Here is a peek into the works of this genius’ in the time of quarantine.

Newton experimented with light
During his ‘Year of Wonders’, one of the first things that Newton turned his attention to, was light. He aimed to understand the properties of light better. In order to do so, he conducted an experiment with prism. Newton drilled tiny holes in the shutters of his bedroom and placed a prism in a position that allows a thin beam of light to pass through it. Through this experiment Newton came to know that white light is composed of seven colours. It was a major step towards the discovery of the Newtonian telescope.

Newton developed the laws of motion and gravity
The quarantine days of Newton were spent thinking about ways the universe works. The famous Apple incident took place during this time. When looking at an orchard, he saw an apple falling from the tree. This simple incident evoked a question in his mind that led to the development of the theory of gravitation: Why does everything fall on the ground? The law of gravity was the result of his efforts at finding answer to this question. After this, Newton developed mathematical formulae for the laws of motion.