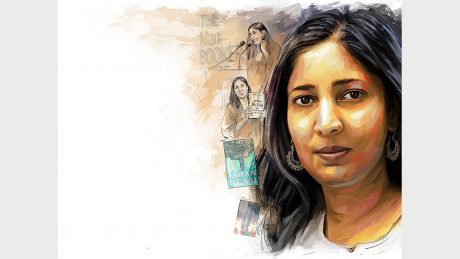 Born in Delhi to novelist Anita Desai and Ashvin Desai on September 3, 1971, Kiran Desai spent her early years in Pune and Mumbai.

Early life
She studied at Cathedral and John Connon School and left India when she was 15 years old. Kiran and her mother lived in England for a year before moving to the United States to study creative writing. She graduated from Bennington College in 1993 and later received two MFA’s — one from the Hollins University in Roanoke, Virginia and the other from Columbia University, New York City.

Works
She first garnered attention in the literary world in 1997 when her work was published in The New Yorker and in Mirrorwork, an anthology of 50 years of Indian writing edited by Salman Rushdie. Desai then left Columbia for several years to write her first novel titled Hullabaloo in the Guava Orchard (1998), about a young man in provincial India who abandons an easy post office job and begins living in a guava tree, where he makes oracular pronouncements for the locals. Unaware that he knows about their lives after reading bits from their mail, they hail him as a prophet. Hullabaloo in the Guava Orchard drew wide critical praise and received a 1998 Betty Trask Prize from the British Society of Authors.

While working on what would become her second novel, Desai went on a travelling spree that witnessed her setting off to New York, Mexico and India. After more than seven years of work, she published The Inheritance of Loss (2006) which explores the impact of British colonisation in India.

Her second book was widely praised by critics throughout Asia, Europe and the United States. It won the 2006 Man Booker Prize as well as the 2006 National Book Critics Circle Fiction Award. When she received the Booker Prize for the novel in 2007, Desai became the youngest female writer to win the award that is considered one of the most celebrated recognitions in the world of letters.

The book revolves around the inhabitants of a town in the north-eastern Himalayas, an embittered old judge, his granddaughter Sai, his cook, their rich array of relatives, friends and acquaintances and the effects on the lives of these people brought about by a Nepalese uprising. Running parallel with the story set in India, the readers also follow the challenges that the cook’s son Biju faces as he struggles to realise the American Dream as an immigrant in New York.

In August 2008, Desai was a guest on Private Passions, the biographical music discussion programme hosted by Michael Berkeley on BBC Radio 3. In May 2007, she was the featured author at the inaugural Asia House Festival of Cold Literature.

Interesting Facts
1. After starting college studies in science, Kiran Desai switched to writing and published her first novel, Hullabaloo in the Guava Orchard, in 1998. It got a boost with appreciation by Salman Rushdie.

2. Desai became the youngest female writer to win the Booker Prize award in 2007 for The Inheritance of Loss. Three books written by her mother, famous author Anita Desai, had also made it to the shortlist for the Booker Prize (Clear Light of Day, 1980; In Custody, 1984 and Fasting, Feasting, 1999). Her maternal grandmother was of German descent while her grandfather was a refugee from Bangladesh.

3. In August 2008, Kiran Desai was a guest on Private Passions, a weekly music discussion programme that has been running since 15 April 1995 hosted by Michael Berkeley on BBC Radio 3.

4. Her mother, Anita Desai received the Sahitya Akademi Award in 1978 for her novel Fire on the Mountain. She also won the British Guardian Prize for The Village by the Sea in the year 1983.