He is an electronics engineer, computer programmer, and technology entrepreneur that co-founded Apple Inc. 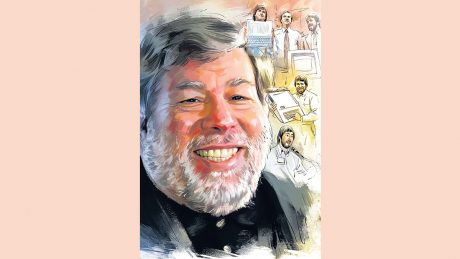 Stephen Wozniak was born on August 11, 1950 to Margaret Louise and Francis Jacob “Jerry” Wozniak, an engineer who was employed in the Sunnyvale, California-based Lockheed Missiles and Space Company and raised in San Jose, California.

Education
In 1968, he graduated from the Homestead High School in Cupertino, California. A precocious but undisciplined student with a gift for mathematics and an interest in electronics, he attended the University of Colorado at Boulder in 1968–69 before dropping out.

He returned to California and attended a local community college and then the University of California, Berkeley. Wozniak worked at several small electronics firms in the San Francisco Bay area before obtaining a position with the Hewlett-Packard Company in 1975, by which time he had formally dropped out of Berkeley.

Scientific, educational quest
After successfully creating Apple I, he designed the Apple II, the first personal computer with colour graphics, and built in BASIC programming language. In 1981 he crashed his small aircraft, leaving him temporarily with traumatic amnesia and was forced to go on a sabbatical. He returned to Berkeley, under the pseudonym Rocky Clark to complete the computer science and electrical engineering courses needed to earn those degrees. He dropped out again but eventually was given credit for his work at Apple. The school awarded him a Bachelor of Science degree in electrical engineering in 1987.

Apple
Wozniak returned to Apple in 1982, though he resisted efforts to involve him in management. He retired as an active employee in 1985 after being awarded, along with Steve Jobs, a National Medal of Technology by U.S. President Ronald Reagan.

Wozniak kept up with the computing world by funding business ventures and occasionally serving as an adviser or board member for companies.

In 2009, he became the chief scientist at Fusion-Io, an American company that produces high-capacity, solid-state storage devices. After Fusion-Io was sold to SanDisk in 2014, Wozniak left the company to become chief scientist at Primary Data, which was involved in data virtualization; that business shut down in 2018. Wozniak spent decades engaged in philanthropic causes, involving the education of children.

Personal life
Wozniak was married to slalom canoe gold-medalist Candice Clark from June 1981 to 1987. They have three children, the youngest being born after their divorce was finalised. Wozniak then married Janet Hill, his current spouse.

Awards
He received 10 honorary degrees. In 1979, Wozniak was awarded the ACM Grace Murray Hopper Award. In 2000, Wozniak was inducted into the National Inventors’ Hall of Fame. The American Humanist Association awarded him the Isaac Asimov Science Award in 2011. In 2014 Wozniak was awarded the 66th Hoover Medal by IEEE President & CEO J. Roberto de Marca. In 2014, the Industry Week added him to the Manufacturing Hall of Fame. In 2015, Wozniak received the Legacy for Children Award from the Children’s Discovery Museum of San Jose.