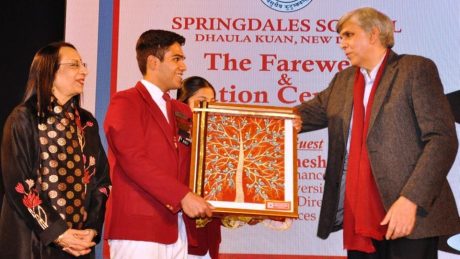 The outgoing Class 12 students got a warm farewell.(HT)

The farewell and citation ceremony

Springdales School, Dhaula Kuan, gave a fond farewell to the outgoing batch in the presence of parents, members of the management board and distinguished guests.

The chief guest was professor Dinesh Singh, former vice chancellor, Delhi University and honorary director, Mathematical Sciences Foundation. In her welcome address, Dr Jyoti Bose, director, Springdales Schools, advised the students to push as hard as the age that pushes against them and continue to be characterised by empathy, objectivity, compassion and a willingness to take on newer challenges. “We don’t need magic for great things to happen— there is a magical power inside you to exploit your potential,” she said. In his eloquent speech, prof Singh stirred the head, heart and emotions of the audience as he urged the students to find their unique drumbeats, be in harmony with their inner selves and not to lose their identity in this era of herd mentality. Giving references from the lives of philosophers and Vedas, he exhorted the students to discharge their debts to society by being humble and respecting individual skills as well as imbibing Indian virtues of love and tolerance. The school choir encouraged the students to embark upon their new life changing journey with confidence and courage through their musical rendition. This was followed by the lighting of the lamp. It was accompanied by the citations read out by the director for each one highlighting their achievements. The students’ and parents’ representatives too shared their thoughts and experiences. While placing their lamps around the globe epitomising the school motto “Vasudhaiv Kutumbkam - the world is a family”, the students pledged to work with commitment towards making the world a better and happier place. They were then inducted to the Old Springdalians Association emphasising the beginning of a new chapter in deepening their bonds with the school. Dr Neerja Sharma, manager, Springdales School, Dhaula Kuan proposed the vote of thanks. The function concluded in Springdalian tradition with all linking arms and singing the Scottish ditty ‘Auld Lang Syne’.

Tagore International School, East of Kailash, bade farewell to the outgoing batch at a graduation ceremony and farewell party.

Vijay K Thadani, vice chairman and managing director of NIIT University, delivered a motivational speech as the chief guest. Angela Arora of Class 12 was conferred the Rabindra Ratna Award. This award is given to a student who performs well in academics and co-curricular activities, takes initiatives, shoulders responsibilities and proves himself/herself to be a true leader. He/she lives up to the school motto, Aham Yogya Asmi. Class 11 students organised a party for their seniors. Titled Amantryà, it was an ensemble of dance, music and laughter. Class 12 students walked the ramp. Angela Arora and Apurv Dev Kaushik were given the titles MsTIS and Mr TIS 2020 respectively.

English lecturer Rajni Jaimini of RPVV, Lajpat Nagar, a Delhi govt school, won The Education Prize for Joyful Learning given by The Global Education and Leadership Foundation. She was conferred the award for making learning joyful.

This annual award recognises the leadership of teachers who make outstanding contributions. Each award carries a certificate of merit and a cheque. The winners are selected after multiple rounds of judging by eminent national and international educationists who form the jury panel. Thanking her principal, Poonam Anand, and the Delhi Govt for their support to teachers and education in Delhi government schools, Jaimini said that she felt blessed to be working in such a dynamic school. Jaimini said she looked upon teaching not as a profession but as a religion. Anand said that it is due to the contribution of teachers like Jaimini that their school has been ranked number two in Delhi and number 5 in India by Education World Magazine in their rankings.

DAV Public School, Kailash Hills, bid goodbye to Class 12 students at a farewell ceremony. The outgoing batch of students took part in a hawan for good luck. Principal Ira Khanna and other teachers wished students success in their forthcoming board exams and encouraged them to scale greater heights. Class 11 students presented a cultural programme for their seniors. Students Manas Kashyap and Astha Pachori were crowned as Mr and Ms DAV. Archit and Tejasvi won the most well dressed titles. The programme concluded with a speech by the principal who wished students good luck.

The German students attended English role-play and debating classes in school. They learnt Indian Warli and Madhubani art, got hands on experience on Science experiments and Bhangra aerobics and Yoganatyam session. The students also learnt Guru Vandana Bharatnatyam dance. A visit to Kiran Nadar museum of Art was organised for them to learn animal figurines art through clay modelling. They also visited the Red Fort, Agra, Fatehpur Sikri, Qutab Minar and Akshardham temple with their BVN buddies. BVN students visited the German school with the German students and enjoyed a tour to the Rashtrapati Bhawan, a walk at the India Gate and shopping time in Connaught Place. The exchange culminated with an inter-cultural and certification ceremony. It was a firsthand inter-cultural learning experience for students and teachers and for the host families. The German students left for Germany with good memories of the bond with the host families and the time spent in India.

Thirteen schools of Delhi-NCR participated in this tournament. The teams played against each other in a competitive spirit to reach the semi-finals on the first day. There was pressure on the young players to prove their mettle. The second day saw the semi-finalists come back with growing confidence to display teamwork. The winners made a close range finish to claim the title. It was a treat to watch the young footballers at the two-day tournament. Principal Amita Gupta gave away trophies to the winners and runners-up. The runners-up (girls) were Sanskriti School, Chanakyapuri and runners-up (boys) were Modern School, Vasant Vihar. RS Junior Modern School (Girls) and Vasant Valley School, Vasant Kunj (Boys) took home the winner’s trophy.

Vandana Jain, president of Sevalaya, an NGO working for the uplift of the underprivileged was the chief guest. She gave an inspiring speech applauding the efforts of students and teachers. She appreciated the job done by the school in the field of inclusive education and holistic development of children. The celebration started with the lighting of the lamp and an invocation to goddess Saraswati. This was followed by the welcome address by school director Gp Capt SC Bahri. A captivating cultural programme was presented. Principal Vandana Baberwal presented the annual school report highlighting the achievements of the second shift at district, zonal, state and national levels in scholastic and co-scholastic areas through a PowerPoint presentation. The prize distribution ceremony was also organised on this occasion. The high achievers of all the classes were rewarded on this day. Among the other programmes were a speech by Shagun of Class 5G, Hymns by the school choir, A Pearl of Wisdom, a story on Tenali Raman, English skits Save Earth, Maleficent and Major Barbara, Hindi Skit Veer Gatha on Sher-e-Punjab Lala Lajpat Rai and a dance performance on folk music. The other dignitaries present were Pankaj Kumar, media advisor to the minister of state for health and family welfare, govt of India; Piyush Jain, secretary, PEFI; Gp Capt Bahri, asstt director Deepa Misra, principal Vandana Baberwal, principal morning shift Richa Sharma and HOD IE/AO Geeta Mallick. The celebration ended with the vote of thanks by Deepa Misra.