This gifted English novelist authored several famous works such as A Passage to India and Howard’s End, among others. He was also a noted short story writer and essayist. 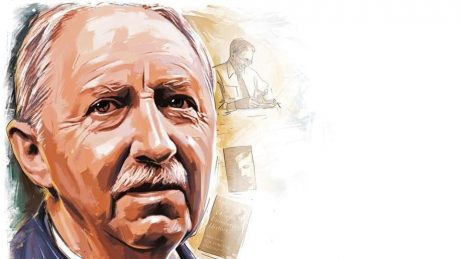 Forster did not write any more novels after A Passage to India but published short stories collections, including The Eternal Moment (1928).(Illustration: Gajanan Nirphale)

Born in London on January 1, 1879, he was the only child of architect Edward Morgan Llewellyn Forster and Alice Clara Lily. Both his parents died when he was a child but his paternal great-aunt left a great legacy of 8,000 pounds.

He was enrolled at the Tonbridge School in Kent but his experience was far from a happy one and therefore he began to see many of the demerits of the English public school system.

He attended Cambridge University where he chose the history, philosophy, and literature as his subjects. He would take active part in groups such as the Cambridge Conversazione Society, also known as the Cambridge Apostles. Forster was among the founding members of the Bloomsbury Group of the intellectuals.

After graduating from university, Forster used his inheritance to travel to Europe, Egypt, Germany, and India. Over some period of time, he realised the need to turn his knack for writing into a full-fledged career.

In 1905, he published the novel Where Angels Fear to Tread which emphasised that people should stay close to their roots. His next two novels were The Longest Journey (1907) and Howards End (1910). It is the story of two sisters Margaret and Helen who live in a house called Howards End. Margaret marries entrepreneur Henry Wilcox and brings him to Howards End. While Howards End was Forster’s first successful novel, his 1908 novel A Room with a View was his most cheerful work.

In 1911, he published the short stories The Celestial Omnibus and The Eternal Moment. A year later, he travelled to India with his friend, Syed Ross Masood, and, in 1913, wrote the novel Maurice which published after his death about 60 years later.

Forster worked as a private secretary to Tukojirao III, the Maharajah of Dewas, in the 1920s. He wrote a work titled The Hill of Devi on the basis of his experiences. In 1924, he published A Passage to India, which won acclaim. Forster won the James Tait Black Memorial Prize for the novel.

Forster did not write any more novels after A Passage to India but published short stories collections, including The Eternal Moment (1928). He also wrote for magazines but was of the opinion that novels should not be turned into films or plays as they did not do justice to the original work. Many of Forster ‘s novels were, however, turned into successful films.

He volunteered for the International Red Cross and worked for three years in Alexandria, Egypt. Drawing on his experiences, he wrote Alexandria: A History and Guide (1922) and Pharos and Pharillon: A Novelist’s Sketchbook of Alexandria through the Ages (1923). He also wrote short stories for newspapers using the pseudonym Pharos. Forster worked as a broadcaster for BBC Radio in the 1930s and 1940s. During the war, he presented a weekly book review programme. In 1946, Forster was elected an honorary Fellow of King’s College. In 1953, he was made a Companion of Honour. Then in 1969 he was made a member of the Order of Merit. Forster died of a stroke on June 7, 1970.

1. Five big-screen films based on books by EM Forster were nominated for 29 Oscars, including three for Best Picture, and they won a total of eight. A Passage to India (1984) was the last film made by British director, producer, screenwriter and editor. Three films based on Forster’s works were produced, written and directed by the duo of director James Ivory and producer Ismail Merchant.

2. Forster failed to win the Nobel for Literature though he was nominated 13 times. A Passage to India, regarded by some critics as his greatest work, has India’s freedom movement as its backdrop.

3. TIME magazine included A Passage to India in its list of All-Time 100 Novels. Forster donated the novel’s manuscript in 1960. An amount of £6,500 raised, was added to the London Library’s kitty.

4. During World War I, Forster desisted from fighting on the ground that it went against his pacifist principles and outlook. Instead, he worked as a medical orderly in Alexandria, Egypt during the period.