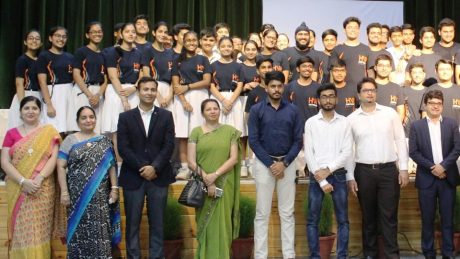 The symposium gave students a chance to exhibit their talents(HT)

The symposium included tech events such as RoboSoccer, Gaming, Programming, Idea-Pitching, Junior Techies and a quiz. Two online events, Cryptic Hunt and Memetics found many takers. As many as 26 schools participated with competitive spirit. Each team performed well, making the symposium a success. The event began with a word of prayer. Principal Dr Rajeev Tyagi appreciated the organising team of Haywire 2.0 for coming up with the second edition. Student president Hardik Aggarwal emphasised that the event offered the perfect platform to technical geniuses of the future. This symposium gave opportunities to students to exhibit their skills and talent. The judges were drawn from tech giants such as Google, India Stem Foundation, EduPlusOne, Robotics Team Invincible and Kreate Technologies LLP. They motivated the winners by awarding cash prizes, trophies and certificates. The sponsors were Sony, CresTech, MacMillan, Aakash Institute, Narayana, SIEC, UniRely, AptSystem, and IDP.

The purpose of the workshop was to cast light on strategies for developing multiple choice questions (MCQs) and improving their quality, to improve students’ overall competency level during their yearly academic assessment. Dr Bhatia said an MCQ consists of a stem and alternative answers and the students are expected to tick the best answer. He highlighted the features of a good MCQ, saying that correct answers and distracters should not be easily identified. It is vital to use clear and concise language and proper sequence in the MCQ. The teacher while framing MCQs should avoid using long and complex sentences and negatives and double negatives. He also underlined the various domains of MCQs: knowledge, understanding, application, analysis, evaluation and creative, and asked the teachers to frame MCQs keeping in mind the domains explained. A qualitative MCQ would foster increased student interest, engagement, performance and development of cognitive abilities. The seminar made the teachers more aware about how to develop quality MCQs.

DAV Public School, Sector 49, Faridabad organised an ISA project titled Survival Skills under the aegis of the British Council. A mock drill acquainted students with techniques that can be used to sustain life in any life threatening situation. Principal Bimal Kumar Das welcomed the subject expert, Dr MP Singh, chief warden, Civil Defence and Subject Expert Disaster Management. The programme began with prayer and then students performed a Bharatnatyam dance Gangadhar Shankaryae. Dr Singh briefed students about the meaning of a disaster, precautions to be taken and search and rescue skills. He gave some dos and don’ts. He gave safety tips such as head protection with bags, safety cover under table, standing around pillars in corners and not touching the wall. He stressed upon awareness and alertness.

A demo of search and rescue team was given. Some rescue strategies demonstrated were blanket rescue, two hands seat, rope lift, fireman lift and wheelchair drill. A fire fighting demo was given on how to use firefighting equipment. The principal thanked the expert for sensitising students about the search and rescue operation. The programme concluded with the chanting of Shanti path.

It helped to introduce school students to new skills of innovation and entrepreneurship with the objective “Let us together unleash the innovator inside.” As many as 53 students of ATL and non-ATL schools participated in this event. This festival was conducted in two phases: phase 1 Student Exploration @ Home ATL and Phase 2 48 Hour TINKERFEST @ ATL. Principal Sumati Anand declared the festival open. She welcomed the participating schools and encouraged them to tinker and showcase their innovations. The programme had several events: Quiz on know your ATL, mentor session on ideate to think about the problem and to develop the prototype, preparing PowerPoint presentation for the prototype and the business plan. The participating schools worked as a team and presented their innovations which were appreciated by the audience. The fest concluded after the distribution of appreciation certificates.