One of the greatest children’s storytellers of the 20th century, his short stories rank among the world’s best. His books have sold more than 250 million copies in over 50 languages. He also had stints as a fighter pilot, intelligence officer, chocolate historian and inventor. 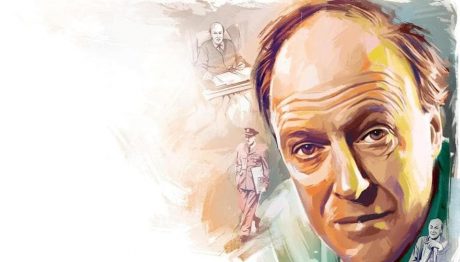 One of the world’s best-selling children’s authors, Roald Dahl was named after Roald Amundsen, the adventurer from Norway, who was the first man to reach the South Pole in 1911.(Illustration: Gajanan Nirphale)

Born in Llandaff, Wales, on September 13, 1916, to Norwegian parents, Harald Dahl and Sofie Magdalene Hesselberg, Dahl was named after Roald Amundsen, the adventurer from Norway who, four years earlier, became the first man to reach the South Pole. The family received two setbacks in quick succession – the death of Roald’s eldest sister, Astri, in 1920, followed by the tragic passing away of his father a few weeks later.

In keeping with their father’s wish that the children be educated in Britain rather than be sent back to Norway, his mother decided to stay back in Wales and had Roald sent to St Peter’s Preparatory School, a boarding school at Weston-super-Mare, in 1925.

In 1929, he shifted to Repton School, Derbyshire, where he evinced more interest in sports, and performed well in football and squash, apart from literature and photography. Pupils at Repton were invited to trial chocolate bars, a memory that stayed with Dahl throughout his life, and inspired Charlie and the Chocolate Factory.

Dahl’s love for travel took him to Canada and East Africa, where he worked for an oil company until the outbreak of World War II. He joined the Royal Air Force aged 23. In 1940, Dahl was severely injured when his Gladiator aircraft crash-landed. Six months after he had recovered from injuries, he took part in The Battle of Athens. Later, after being posted to Washington, he supplied intelligence to MI6. In 1942, he became an assistant air attaché in the British Embassy.

His first book for children was The Gremlins, published in 1943, about mischievous little creatures that were part of Royal Air Force folklore.Dahl went on to create some of the best-loved children’s stories of the 20th century, such as Charlie and the Chocolate Factory, Matilda, James and the Giant Peach, The Witches, Fantastic Mr Fox, The BFG, The Twits and George’s Marvellous Medicine.

He also enjoyed success on television. Having had his stories told in six episodes of the award-winning US series Alfred Hitchcock Presents, his Tales of the Unexpected ran for several series between 1979 and 1988. Dahl wrote screenplays in the 1960s, which included the James Bond films You Only Live Twice and Chitty Chitty Bang Bang, that were loosely based on Ian Fleming’s novels.

Dahl died on November 23, 1990 in Oxford, aged 74 after battling a rare cancer of the blood. He was buried at a church in Buckinghamshire, along with his snooker cues, chocolates, a power saw and HB pencils.

His short stories – Someone Like You (1954), The Landlady (1959) and Tales of the Unexpected (1980) – won him Edgar Allan Poe Awards from the Mystery Writers of America. In 1983, he received the Whitbread Children’s Book Award and the World Fantasy Award for Life Achievement. In 1990, the British Book Awards honoured him as the Children’s Author of the Year. In November 1996. In June 2005, the Roald Dahl Museum and Story Centre in the author’s home village Great Missenden was opened. Africa, UK and Latin America celebrate September 13, his birth anniversary, as Roald Dahl Day.

1.In 1960, Roald assistedn engineers in the invention of the Wade-Dahl-Till valve, a cereral stunt. This was prompted by the need to alleviate the head injuries endured by his son Theo, after a car accident in New York.

2.In 2005, Cherie Blair, wife of former United Kingdom Prime Minister Tony Blair, inaugurated the Roald Dahl Museum and a Story Centre in his hometown, Great Missenden. The author spent 36 years of his life in this village.

3.In 2002, one of the modern landmarks in Cardiff Bay, Wales - the Oval Basin plaza - was renamed Roald Dahl Plass. Plass is Norwegian for “place” or “square”, alluding to the writer’s Norwegian roots.

4.The main-belt asteroid 6223 Dahl, was named in memory of the author in 1996 - six years after Dahl’s death. The asteroid was formerly called 1980 RD1 and was discovered by Czech astronomer Antonín Mrkos in September, 1980.

5.In 2010, Gibraltar Post from Gibraltor, a British overseas territory released a set of four stamps, which featured four of Dahl’s books. Two years later, a set of six stamps was issued by the British Royal Mail.