This inventor, designer and entrepreneur who co-founded Apple Inc. was the mastermind behind technological breakthroughs galore such as the iMac, iPod, iTunes and the iPad. He created a sensation with the launch of first generation iPhone, that was named the Invention of the Year in 2007 by Time Magazine. 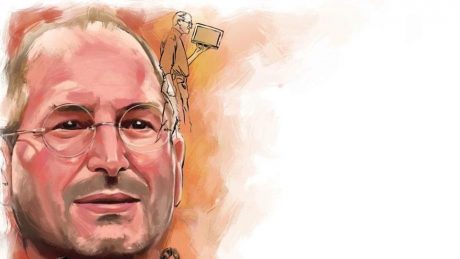 Born on February 24, 1955 to Joanne Schieble and Abdulfattah Jandali in San Francisco, California, Steve Paul Jobs was adopted by Paul Reinhold and Clara Jobs and raised in Mountain View, California.

He was enrolled at the Homestead High School where he met Steve Wozniak, who grew up to be Jobs’ partner and co-founder of Apple Computer. After passing high school in 1972, he joined Reed College but dropped out within six months to pursue creative classes, including a course on calligraphy.

Jobs began his professional career as a technician at Atari Inc. in Los Gatos, California, in 1973. There, he created a circuit board for the arcade video game Breakout. Next was the development of the digital ‘blue box’, which allowed free long distance calls. In 1976, he, along with Wozniak, founded the Apple Computer Company. In 1984, he launched Macintosh, the first mass-produced computer with a graphical user interface. In 1985, Jobs resigned from Apple. That same year, he established NeXT Inc., which became famous for its technical strengths, including an object-oriented software development system. In 1986, he bought the Graphics Group (later renamed Pixar). In 1996, when Apple acquired NeXT Inc, Jobs returned to the company he had co-founded as the de facto chief and was later appointed as the interim chief executive. Two years later, Apple iMac was introduced to the world. In 2000, he became the permanent CEO of Apple. The following year, the company sortied into the world of music with the introduction of the iPod, iTunes digital music software and iTunes Store. In 2005, with Disney’s purchase of Pixar, he became the largest shareholder of Walt Disney Company with approximately 7% of the company’s stock. He launched the iPhone in 2007 and iPhone 4 in 2010. In 2011, he resigned as the CEO of Apple but continued to serve as the chairman of the company’s board.

In 1991, Jobs married Laurene Powell. They had three children – son Reed as well as daughters Erin and Eve – and lived in Palo Alto, California. In 2003, he was diagnosed with pancreatic cancer and succumbed to the disease on October 5, 2011, aged 56.

California Governor Jerry Brown declared October 16 as Steve Jobs Day. A bronze statue of him was unveiled at the Graphisoft Company in Budapest in December 2011. Posthumously, he was awarded with Grammy Trustee Award and inducted as a Disney legend. Fortune magazine named him the ‘greatest entrepreneur of our time’.

Besides receiving a large number of awards such as the National Medal of Technology in 1985 and the Jefferson Award for Public Service in 1987, Jobs was inducted into California Hall of Fame in 2007. He was named the most powerful person in business by Fortune magazine. In 2009, Fortune named him as the CEO of the decade. In the following year, he was ranked No. 17 in Forbes list of the World’s Most Powerful People.

1. As a child, Steve Jobs spent long hours with his father, dismantling and rebuilding electronic devices in their garage. Those experiences helped sharpen his mechanical prowess and tenacity.

2. Faced with frequent bouts of boredom during the years when he in elementary school, Jobs tended to lose focus on studies and became a prankster. In the fourth-grade, his teacher had to cajole him to study.

3. Steve Jobs asked William Hewlett, co-founder of Hewlett-Packard, for some parts to complete a school project when he was 12. Impressed, Hewlett offered the boy an internship in his company.

4. Jobs named his company Apple because it came before Atari — where he had worked earlier — in the phone book. He was mentor to Google founders Sergey Brin and Larry Page when they launched Google.

5. In mid-1974, Jobs travelled to India to meet a saint named Neem Karoli Baba in the quest for spiritual enlightenment. The effort was however in vain because the holy man has passed away the previous year.