Steam engines were the first source of mechanical power invented by mankind. 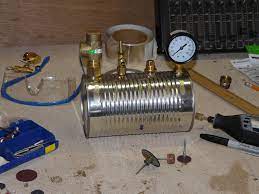 The activity can be carried out with the help of a tin can, soldering iron and copper pipe.

Steam engines are devices that employ heat to create steam, which then conducts some mechanical processes. The functioning of a steam engine can be compared to a huge kettle on top of a coal stove. The water in the kettle boils and transforms into steam as a result of the heat from the fire. Unlike the steam from a kettle, which is wasted by blowing into the air, the steam from an engine is captured and used to power a machine. Making a DIY steam engine at home is a fun activity which can help school goers learn about conversion of thermal energy (heat) to mechanical energy (work). Let's take a look at how we can do it through an easy-to-do experiment.

What is happening in this experiment?

As the candles are lit, the water in the copper pipes begins to heat up and boil over time. It will shoot out of the jets of the tube/pipe as it evaporates into steam, spinning the entire can in the bowl. Thus, heat energy gets converted into mechanical energy.