FOMO or Fear of Missing Out is a toxic internet trend. 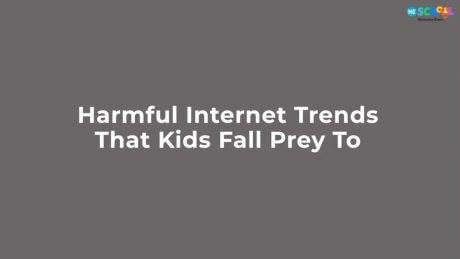 The internet has been taking the world by storm, making things easier and more convenient for kids and adults alike. However, it is also a place full of harmful trends that youngsters often easily fall prey to. One of the most harmful internet trends is social media influence. Children often don’t realize the insidious side effects of social media practices and might need a reality check from time to time. For example, the cinnamon challenge that was trending for a while involved not drinking water for an exact minute after intaking a spoonful of cinnamon.

Consumption of cinnamon can often lead to severe dehydration to the extent of lung damage. Thus, one can understand how dire the consequences can be. Another challenge that surfaced on the internet was becoming a catfish, that meant stealing someone else’s identity to lure others. Instead of doing good, this has been proven to result in noticeable reduction of kids’ self-esteem.

Another disturbing online trend is FOMO (Fear of Missing Out) that started on Instagram. It happens when youngsters feel left out. They constantly see their friends leading attractive lifestyles, which, in turn, severely affects their mental health. YouTube has also become a go-to destination for youngsters to solve their day-to-day problems instead of referring to experts. They become victims of inappropriate content and fall prey to unreliable YouTube sensations. Last but not the least, youngsters also end up binge spending on apps. They are lured by loyalty points and rewards that are all over the internet, in the hope of making some pocket money.